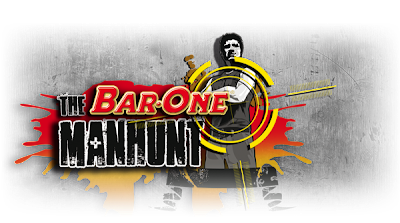 Just like we can’t get enough of local reality shows, we love it whenever there’s a new one on the telly. But this time its the return of the Bar One man hunt. Yes, your going to see rugged men every episode. Yes, you are going to see them with their shirts off every now & then. And at last, yes, they are very good looking.

Somehow I missed the first episode of the season so I can’t really give you the low-down on what happened then, but I can sum up what happened this week. The 25 guys (in teams) were given the opportunity to create their own one minute movie from scratch -yes- the storyline, stunts and and! This ranged from guys setting themselves on fire (with protective gear on), being thrown on glass tables and re-creating bomb effects with jumps, dives and drives.

Out of all this crazy stunting and special effecting – we loved the yellow teams’ ‘movie’, but the red team won the challenge. Then again, what do we know?! Sad as Craig Bester, another hottie, got voted off. By using coloured pebbles * nogals *sigh*. Dear producers, instead of sending them home rather send them to an isolated camp where they feed off nothing but Bar Ones? Yes? No? OK! Just keep them on our screens.

We pinned the Bar One man hunt as one of our favs (favourite) things to watch this winter, with a Bar One at hand of course – Besides that, there are awesome prizes which you can win by simply watching. PLUS we’ll pick OUR Bar One hottie of the week (below). Let us know what you think in the comment box.

PS. Do try out the Peanut Blast Bar one – sjoe! I can’t get enough… And Patrick, please smile!

HOTTIE OF THE WEEK

﻿Craig just Happens to be our HOTTIE OF THE WEEK. We couldnt let him pass by without some recognition!